Skip to content
By Andy Winfield
Here at the Botanic Garden we’ve decided to take a slight change of direction on the blog; while there will still be science based items, there will be much more about the day to day running of the Garden and various experiences of the small team who work here. There may be items from volunteers or staff and the subject matter will be diverse, you will be surprised at the areas of life plants take us.
First, an introduction; I’m Andy, a career change, I’d done this and that, warehouse work to office

work ending as a Costs Draftsman for a Bristol Law firm. It was at this point I considered my future working life stretching ahead and didn’t like it; and so I shifted direction and embarked on a career in horticulture. This was a good move! After a two-year course I landed a job at the University of Bristol Botanic Garden, this was 2001 and the little-known Garden was tucked away in woods beyond Bristol’s famous suspension bridge spanning the Avon Gorge. The gardening was good and the range of plants we dealt with inspiring; we held large plant sales that kept the Garden afloat and paid my wages. 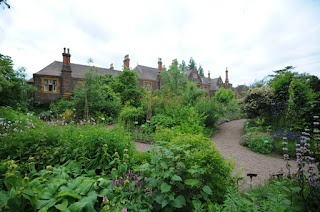 After a few years the University began a process which considered its outlying properties and decided to sell the site of the Botanic Garden and move the whole lot to a new location. Without going into too much depth about how to firstly move a 5,000 species plant collection and secondly simultaneously design, landscape and create a new Botanic Garden using these plants, trust me when I say it was quite an experience. I feel very privileged to have been a part of the process and one of a small dynamic team that is still together today driving the Garden onto the next phase and the next. The team is buoyed by many incredible volunteers bringing a multitude of skills with them; they are a very inspiring bunch! We’re a small staff team and so must diversify into many different areas; I’m still primarily a gardener but I also manage our website and social media, organise a few events and influence our events theme. This year all our events were based around bees and pollinators due to interest from followers and likers of our social media.
While it was difficult to leave the old site, the Botanic Garden a decade later is a vibrant hub of horticulture and science with each week bringing something new, and it is these things we’ll be telling you about in the blog.
This week in the Garden has been all about protecting plants from the impending winter. Our reserve glasshouse space fills up quickly as we bring in pots and dig up plants more used to a warmer latitude. The biggest of these are cycads, plants with a long fossil history, a weighty woody crown and argumentative spines. They always lash out when we take them in and leave their mark, but they’re wonderful plants and they’ve been in the family for a long time and on the planet much longer than us, so we let them off; this year two plants are producing magnificent orange cones which will become a great feature for visitors next year.
Plants that can’t be moved inside are wrapped up and protected with bark, straw and constructions that will protect them from cold, wet and wind that we’ll all experience. It’s a poignant time when we say goodbye to them for the season, the beginning of the darker days of winter. While dark, the winter days are far from being a chore, I enjoy them as much as summer. Plants are structural and still, where there is flower it is fragrant and small, and, while the maintenance is less, we’re able to get on with more landscaping jobs which make big changes in the Garden. This winter a South African mud hut or Rondavel will be built in the South African display, and a peony garden constructed in the Traditional Chinese medicinal display, more on that another time.
Also, this week we’ve launched ourselves into the 21stcentury and are trying out a MEWP (Mobile Elevated Work Platform), also known as a cherry picker. Our Wisteria, Magnolia and Roses which grow on the wall of the 18thcentury house are getting harder to prune from a ladder, so we felt it was time for machinery. It all worked very well (although quite high up!) and will do for us until someone invents a jet pack, which as gardeners, we’re all looking forward to.
All of this work is worth it when you hear and see the enjoyment from visitors. Our aim is for a visitor to leave the Garden with a greater understanding of the role plants play in their lives and ultimately, as a result of this, a greater respect for the planet. Lofty aims, but every little bit helps.

Adults - £5.00
Children under 18 - Free
Members (Friends of the Garden) - Free
University of Bristol students and staff (including retired staff) - Free