Skip to content
Andy gently pushes some moss out of the way to allow me to peer in. “See there,” he says, “they’ve moved some of this moss and built that wall – this is occupied”.  I’m staring into one of the rooms of the hotel trying not to invade the guests’ privacy, but also too curious to look away. The occupant seems to be out getting a meal or tucked away so as not to be seen by peeping eyes.
We are standing in the wildlife area of the Botanic Garden, behind a city skyline of wooden planks. We are staring intently into what might at first glance look like a very artistically and precisely stacked woodpile.  However, this is indeed the Garden’s bee hotel – the sign above it even says so – and there are guests!
The Garden had quite a bit of bamboo left over from the construction of the Chinese herb garden, as well as other materials from some coppicing they had done, and what better way to use them than to create habitat to encourage native bees.

Though we often think of hives humming with tens of thousands of bees, most bees in the UK actually lead a solitary lifestyle. This means that a female bee will find or make a burrow where she will rear her larvae on her own.
The nest type and habitat requirement of each species is a little different. The British Science Association created a very informative videoin 2009 as part of their ‘Save Our Bees’ campaign, which talks about the habitat and nests for a variety of native bee species including leafcutter bees, masonry bees, tawny mining bees, cuckoo bumble bees  and carpenter bees.

There’s something for everyone at the bee hotel

The bee hotel was constructed with many possible occupants in mind as well as their diverse habitat requirements.
On the ground floor of the hotel there is a section of large diameter plastic piping that has been sealed at both ends. Protruding out of the side of the pipe is a small piece of bamboo. This is ideal bumblebee habitat as the bamboo provides a narrow entrance but then opens up into the larger pipe.
There are 24 species of bumblebee in the UK, but only eight of these are common. Bumblebees build communal combs either underground or in long tussocky grass, with narrow entrances to discourage curious predators. This ground floor suite of the hotel fits the bill nicely.
As you move up from the ground floor you notice that a diversity of materials have been used including bricks and branches as well as bamboo.
Up closer to the penthouse suites it is mainly bamboo sections that have been stacked and the ends stuffed with moss. The one we are looking at has clear evidence that it has been occupied. Some of the moss has been moved aside and a mud wall has been constructed save for a small hole, about a ¼” in diameter, that is clearly the entrance.
The entire hotel is kept dry with a living roof with semperviren succulents and a skillfully woven willow ‘Bee Hotel’ sign to top it off.
Andy is clear that this is the Garden’s first foray into bee hotels, but this evidence that it’s being used within the first year of construction is encouraging. He is hoping that the diversity of habitats created within the hotel will attract lots of different insects, not just bees.

There is global concern about the welfare of bee populations as loss of habitat and food sources, disease, and widespread use of toxic chemicals take their toll on these insects. The loss of bees has significant implications for food security as well as healthy ecosystems in general.
The staff at the Botanic Garden hope the Bee Hotel not only attracts insects, but also inspires visitors to the garden to construct habitats at home and help build resilience for our native pollinators.

Bamboo or branches cut into 10 inch lengths or so with 1/8-3/8” holes drilled 3-8 inches deep are ideal habitat for solitary bees. Bundle a group of these lengths together and hang them in a dry place and you’re done – simple. You can even use dried stems of raspberries, brambles and elder or other similarly sized hollow cane-like vegetation bundled together.
The key, however, is that the material needs to be dry and it needs to stay dry. It is the wet rather than the cold of winter that can threaten these animals, so keeping the habitat dry is essential.
This is also a great project to do with children – from collecting the materials to maybe even some supervised drilling and then finally watching to see who moves in. I’m looking forward to building some habitats with my son…as well as watching the bee hotel at the Garden over the next year or so to see who has come to stay!

Photos of pollinators at work in the garden this week: 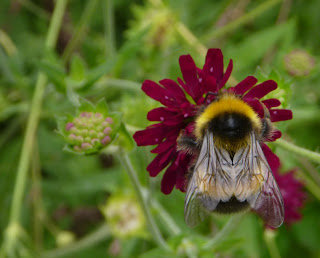 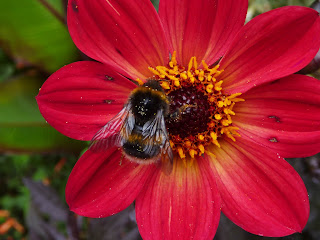 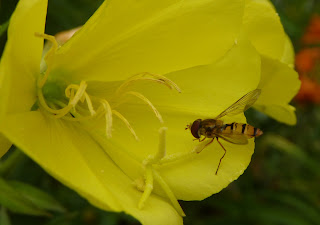 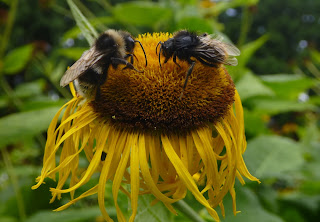 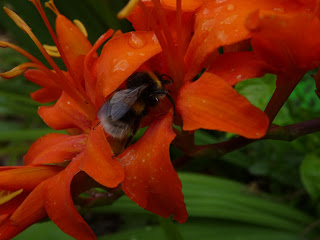