The Garden is changing year on year, saplings are becoming trees and borders now fill out showing maturity. One of the changes is visitor numbers to the Garden which have risen steadily, and as a result our facilities were becoming inadequate, such as the loos. 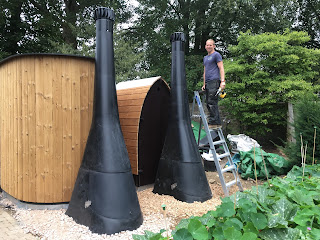 What is a forward thinking 21st Century Botanic Garden to do when the they need new toilets? We were in no doubt that we had to think of an alternative that is safe and sustainable.

Toilets are all about waste, drinking water is used to flush them and research suggests that the average person uses 45 litres of water each day just from flushing a toilet; if we could find a way of restricting this we could save thousands of litres in the Garden.

So, with the help of the University’s Sustainability Department, and Woo Woo waterless toilets, the loo we went for is French in design but wouldn’t look out of place in a Scandinavian woodland with its lodgey feel; they arrived in kit form, think of the biggest IKEA self build and you get the picture. It is not so much a compost toilet but a desiccating device; a sealed tank is sunk into the ground with a chimney raised from the back, this chimney faces south and has a turbine on the top which draws in warm air, removing smells and evaporating moisture. In time this is said to remove pathogens and leave next to nothing in the tank. These facilities are becoming more common now with the National Trust and many golf courses, allotments and even canal barges turning to them.

So far the public have taken to them, they look unusual and the idea of helping the environment has struck a chord, there is genuine interest and humour; they never used to be able to joke about something like this but now they have a lot to go on…